Like many of her classic songs, nearly every artifact in Martina McBride’s new exhibit at the Country Music Hall of Fame has a good story behind it.

Ahead of Friday’s opening of “Martina McBride: The Power of Her Voice,” the country star showed us around the career-spanning exhibit — from her childhood stage outfit to her country radio-rattling “Tomato” T-shirt — and naturally, the memories came flooding back. Here’s what we discovered.

One of her first stage outfits she wore at age 7

McBride got her start singing on stage with her family band, The Schiffters (her maiden name is Schiff).

“It was such a cool way to grow up,” she says. “I think we kind of took it for granted a little bit, even though it was very different. It wasn’t like we were one of five family bands in the area. And when I look back on that, I’m so grateful.”

“I think it gave me not only a rich upbringing in country music — my dad was a traditionalist — but being able to cover songs on the radio, it was great ear training. It was great exposure, and great experience performing in front of people.” 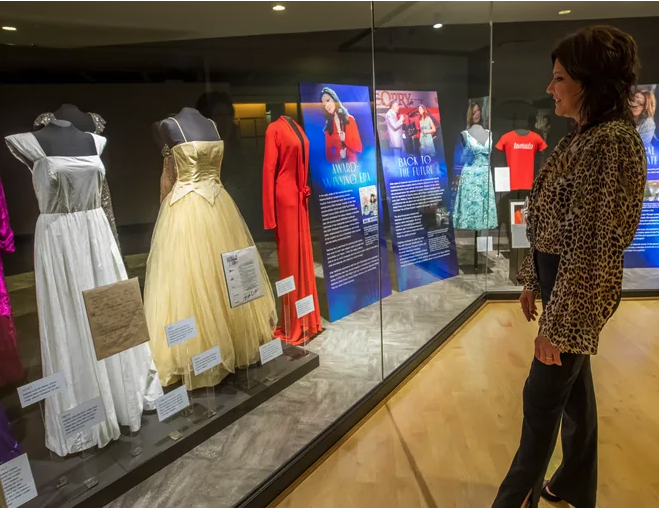 “I won a contest, and the prize was I got to go into a local recording studio in Wichita, Kansas, and record with the band,” McBride recalls. “I went in there on a Sunday afternoon and sang through the songs a few times. I guess we found a place that pressed (records). And of course, I have a unicorn on there, because I was 16, and I was very into unicorns.

Among the outfits on display is one that McBride wore when she performed on the CMA Awards for the first time in 1994.

“It was a maternity dress. I was seven months pregnant with my daughter Delaney, and I had my debut performance on the CMAs (singing) ‘Independence Day.’ I think I got to do like 50 seconds of it or something. So that was a memorable night…It sort of like felt like (my) arrival, in a way. It got the industry talking, and it was a big moment on the show.” 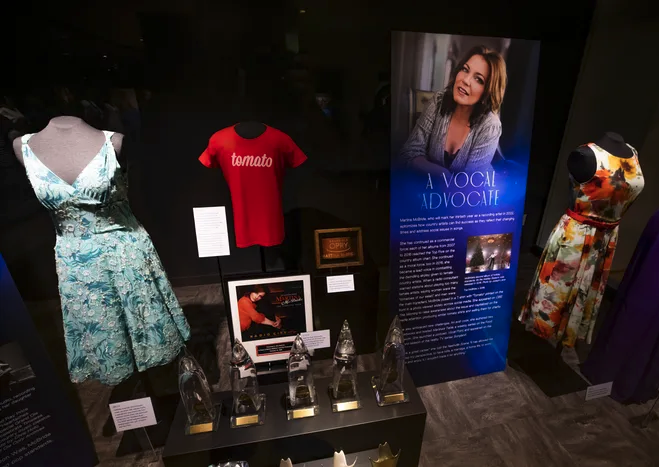 A quilt from her grandmother

McBride’s paternal grandmother sewed many of her childhood outfits for both on and off stage, and shared some of the craft with her granddaughter.

“The animals in the middle (of the quilt) were embroidered,” McBride says. “She taught me how to do embroidery and bought me a little kit. I did all of these animals. And when I was done, she made a quilt as a surprise with all of these scraps from different clothes that she had made for us kids.”

The black T-Shirt with the band name “The Penetrators,” revealing her hard-rocking past

“It was my first band out of high school. I graduated, moved to Hutchinson, Kansas, and joined this band. We sang Pat Benatar, Heart, Journey, all kinds of rock music. I was barely 18 years old, and traveling all around Kansas in a van with a hole in the floor. Screaming my head off (on stage). They really should have a picture of my hairstyle. It was very ’80s.”