Country music icon Martina McBride is not letting the Nashville summer heat ruin her Christmas spirt, and begins her gift giving with the release of It’s The Holiday Season. The 9-song holiday set will be released on October 19th and is avaialbe for pre-order here. 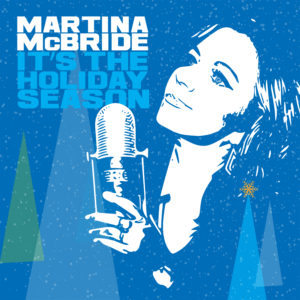 For this album, McBride collaborated with the late Patrick “Pat” Williams who arranged a set of classic Christmas songs with accompaniment from more than 35 world-class musicians at the famed Capitol Studio in Los Angeles and Blackbird Studio in Nashville.  This release follows her 1998 multiplatinum White Christmas.
“It’s been exactly 20 years since I released White Christmas.  With that album I wanted to make it classic and something that would stand the test of time, which I feel like it has done. I wanted to accomplish the same thing with It’s The Holiday Season, but with a different feel. So I decided to make most of the album with a big-band swing vibe that takes you back to the Sinatra, Dean Martin, Ella Fitzgerald records. We recorded more of the pop Christmas numbers that lend themselves to that kind of feel rather than the focusing on the hymns like we did with White Christmas. I think they are great companion pieces and my hope is that they will both be enjoyed for years to come.” says McBride.